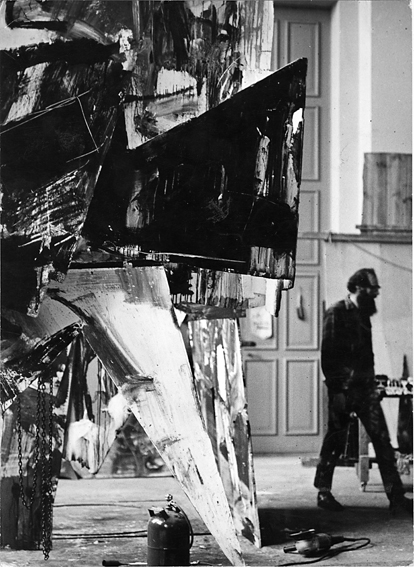 This year Emilio Vedova speaks to the entire city of Venice, his works "live" some of the most prestigious cultural spaces of the city.
Among these there had to be three places of "worship" of the lagoon museology as the Museo Correr, Ca' Rezzonico - Museum of the venetian Seventeenth century and Ca' Pesaro International Gallery of Modern Art, which, with their permanent collections, "open" an extraordinary" confrontation-encounter "with the work of the great Venetian artist, through a common thread called Vedova Plurimo. It is under this title that took life the project, promoted in collaboration between Fondazione Emilio e Annabianca Vedova Annabianca and Musei Civici Veneziani, curated by Germano Celant, and the exhibition design by Daniela Ferretti, who has sought to re-read some masterful works of the great artist in the light of the artistic history of Venice which inevitably has permeated even his extraordinary personality.

At the Museo Correr, in the "Hall of the Four Doors", one of the few areas of New Magistrates that has essentially retained its original structure, dating from the late sixteenth and early seventeenth century, will be installed the Disco Chi brucia un libro brucia un uomo, in 1993, produced by Emilio Vedova after the devastating fire and the destruction of the Library of Sarajevo during the war years, displayed together with Oltre ’86.
On the second floor of Ca 'Rezzonico - Museum of Seventeenth Century Venice, facing the extraordinary frescoes taken by Zianigo's Villa  by Giandomenico Tiepolo will be exhibited two Frammenti (one of which is dedicated to Giandomenico) and a Frammento/Scheggia, in an intense " dialogue "with the great artist Seventeenth Century.
In the hall on the ground floor of Ca' Pesaro, in the revisited exhibition curated by Gabriella Belli, in collaboration with Silvio Fuso and design project by Daniela Ferretti, will be visible from May 31, Plurimo 1964, donated to the museum by Emilio Vedova in 1967 and Omaggio a Dada Berlin 1964/1965, both made in Berlin, where the artist lived for nearly two years between 1964 and 1965.