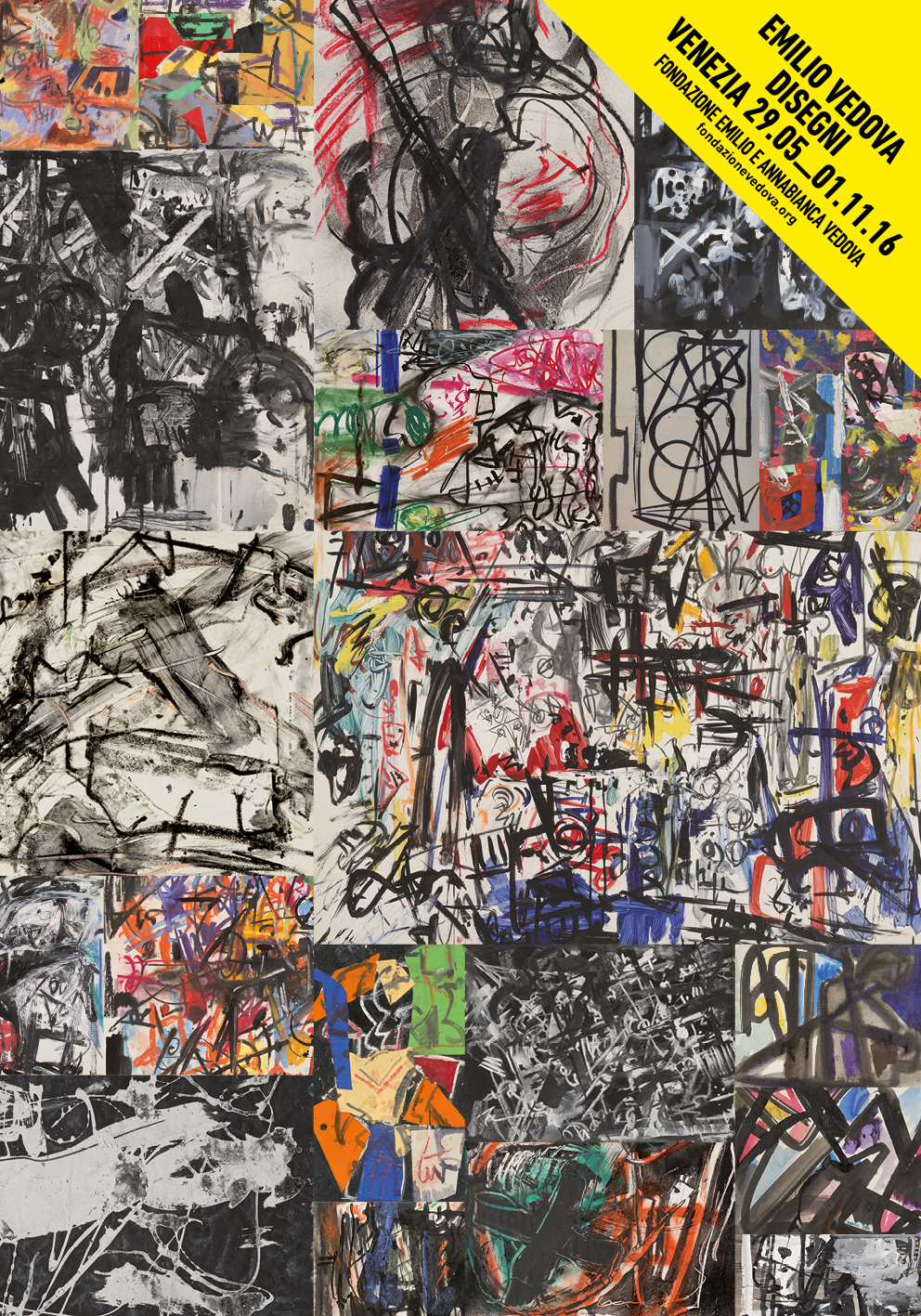 For the occasion of the tenth anniversary of Emilio Vedova’s death, the Fondazione Emilio e Annabianca Vedova presents the "Emilio Vedova Disegni" exhibition, hosted in the spaces of the Magazzino del Sale - Zattere 266, from 29 May to 1 November 2016. The exhibition is curated by Germano Celant and Fabrizio Gazzarri.
The exhibition is entirely dedicated to works on paper produced by Emilio Vedova during his long and complex career, from his earliest works in 1935 to 2006. Selected and drawn from the Fondazione’s own archives, which hold a significant corpus of works on paper that is largely unpublished, the drawings cover the artist’s entire expressive development. The exhibition has been planned in line with the principle of presenting the milestones of his artistic evolution, from figural to informal art. Vedova conceived his drawing as a basis and anticipation of his paintings, analysing it in accordance with the logic of co-presence between time and time and space without rules and rejections; it was a reflection of his interest in Futurism and its propulsive energy.
The "Emilio Vedova Disegni" exhibition is divided into two sections:
The first section, with works dating from the years between 1935 and 1940, document Vedova’s studies and the early forays into the depiction and recording of the world. Their mood reflects the great Venetian and baroque painting which they explore. The exhibition presents the various media with which the artist experimented – from ink to pastel, and from charcoal to graphite and red chalk – and a range of subjects, from Venetian architecture to stories from the Bible, and self-portraits to studies of the classics.
The second section, with works dating from 1940 to 2006, is based on a selection of works which, produced soon after the Second World War, move away from figuration and establish a fragmentary, aggressive style echoing the historic avant-garde movements, from Cubism to Futurism. After 1950, Vedova’s manner of producing art became a gesture immersed in matter revealing the presence of the subject himself, the artist. In the 1960s, the surface came to the fore as a vehicle for light and space. It began to host a crackling of marks and colours that give a sense of a sensorial and emotive unleashing on the part of Vedova, who during this period produced his multi-formal and open sculptures, the Plurimi of 1962-1964. His interest in fragmentation called into question the dynamics of full and empty, pushing his drawing towards a boundless, unlimited atmospheric condition.
This nebulous magma led to further internal upheavals that reflected the political events of the years between 1966 and 1968. After a meditative pause during the 1970s, we arrive at Vedova’s drawings of the 1980s, in which line imposes itself as a project for an evolution which adds the use of the execution of the teleri (vast canvases) and the construction of the Dischi / Oltre and Tondi to pure dimension.
In order to give a sense of Vedova’s magmatic and fluid way of producing art, the layout of the second section has been planned by Celant as a compact, full grouping, forming a constant territory of marks and gestures that intermingle and blend. The idea is to bear witness to the artist’s uniformity and energetic impact and his constant, dazzling drawing.
To enrich the vision of all the drawings in the exhibition, two series of teleri from the 1980s, some never before on display, will be set in motion within the space of the Magazzino using the machine designed by Renzo Piano.
A rich anthology of drawings will be published by lineadacqua edizioni for the exhibition, with texts by Alfredo Bianchini, Germano Celant and Fabrizio Gazzarri, who recall the Fondazione’s tenth anniversary and the lives and commitment of Emilio and Annabianca Vedova, and offer a reading and interpretation of the logic and method underlying the artist’s manner of drawing. 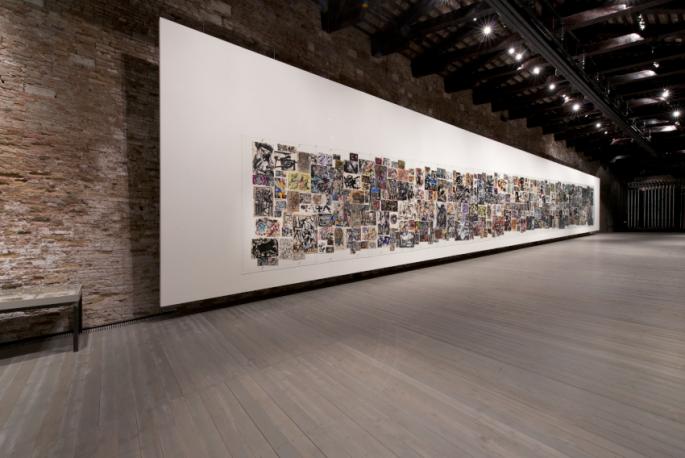 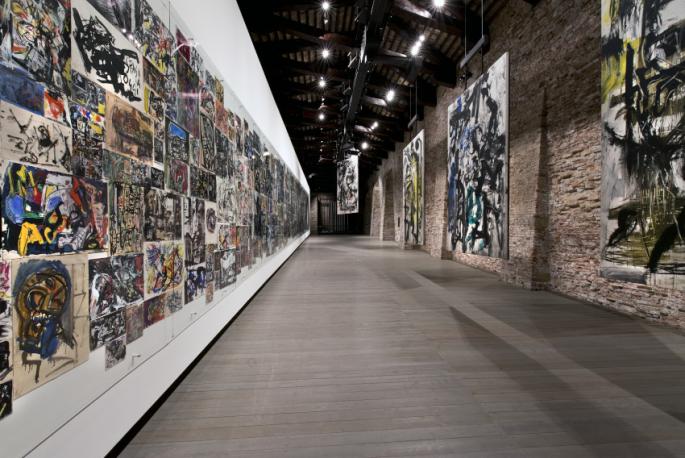 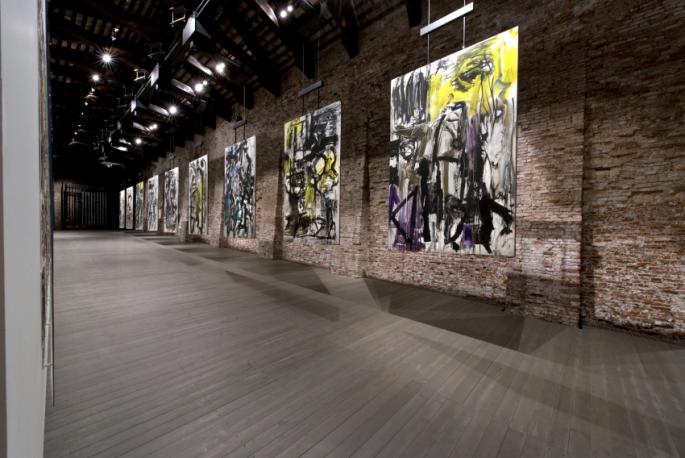 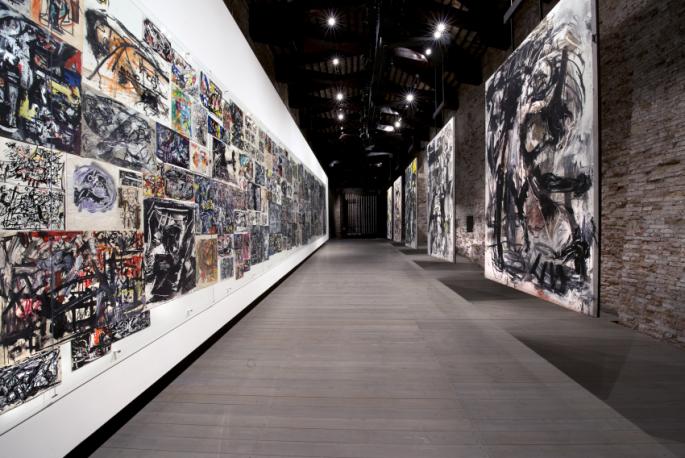 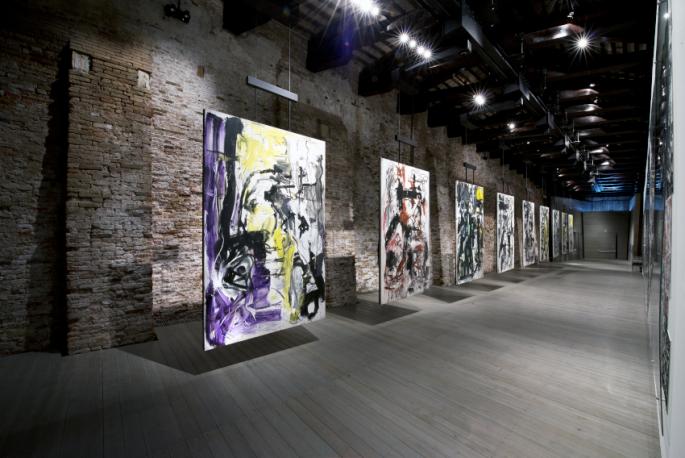