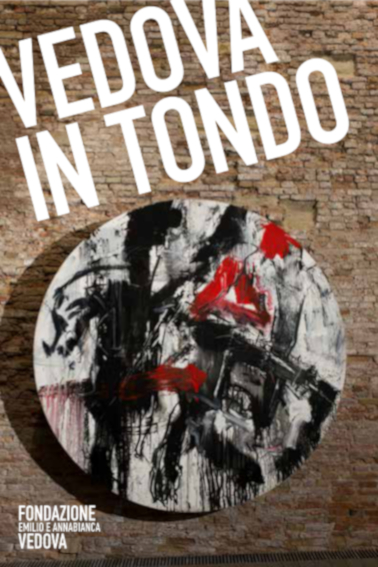 The exhibition offers the public a cycle of works marking a key point in the development of the Venetian artist: the Dischi, Tondi and Oltre of 1985-1987 and a selection of large teleri many of which never before shown in public, dating from 1981-1985.
Towards the end of 1984, Emilio Vedova began a period of intense research stimulated by the use of the circle, which was to keep him busy until 1987 in a sort of challenge towards this sacred figure, so much in contrast with his artist’s vision of a lacerated, asymmetrical and ever-shifting universe.
The exhibition comprises two sections of works: one fixed to the wall and floor, which maintains a dialogue with the other section, comprising three series of paintings moved by robotic shuttles. The first includes the Disco called Non Dove ‘86 I (23-1-86), a large two-sided painting on wood, placed on the floor; the date next to the title is that of the death of Joseph Beuys. The painting was executed by Vedova immediately after learning the sad news of the death of an artist he greatly admired. Five large Tondi of 1985-1987 hang on the large 15th-century wall of the Magazzino del Sale; these are painted on canvas and on one side only. The second section comprises three series of moving works, including a selection of Oltre and large teleri of the 1980s. The Oltre, round works inserted in a square may be said to round off the problem of the circle and Vedova’s powerful impulse to break, lacerate the “frontiers” which Vedova described in these terms: “...thrusts of overflowing – incontinences of perimeters...”
The large teleri of 1981-1984 precede and prepare the terrain for Vedova’s fundamental exploration of the circle, from the Compresenze to the Di Umano.
With this exhibition, the Fondazione Emilio e Annabianca Vedova aims once more to stress the experimental intentions of Emilio Vedova’s work. In his long and prolific artistic career, Vedova explored very different disciplines with the greatest energy, impelled by an un-restrainable and all-devouring drive to search.
Emilio Vedova was well aware of what Renzo Piano had designed for his Foundation, but he did not live to see the “machine” that moves his works in action; a ‘Vedovian’ movement, dynamic and exciting, that the Vedova in Tondo exhibition activates once more in Magazzino del Sale.
This exhibition will once again compare Emilio Vedova’s oeuvre with other artists: for the first time in its history, the Fondazione has sought to stimulate a direct contact with music, re-evoking the particular attention Emilio Vedova displayed to this artistic discipline, which nourished significant echoes in his own work, as shown by some examples of great international significance.
On 16th May, the composer and pianist Stefano Bollani opened the exhibition in a unique, unrepeatable moment, offering some musical improvisations inspired by the great Vedova paintings installed in the space of the Magazzino del Sale. The video of the evening will be screened in the Magazzino for the entire duration of the exhibition. 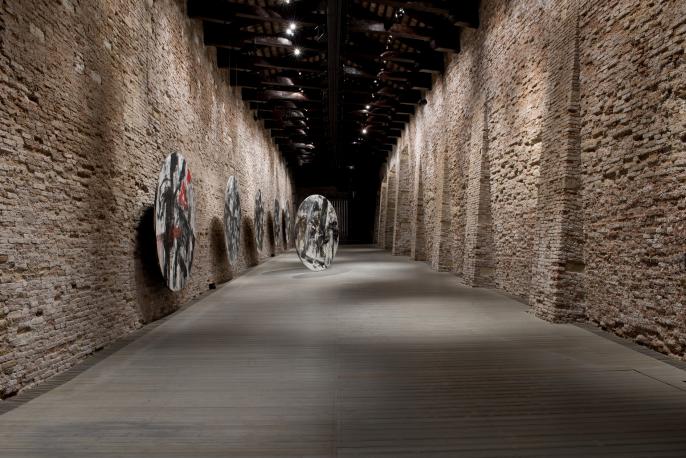 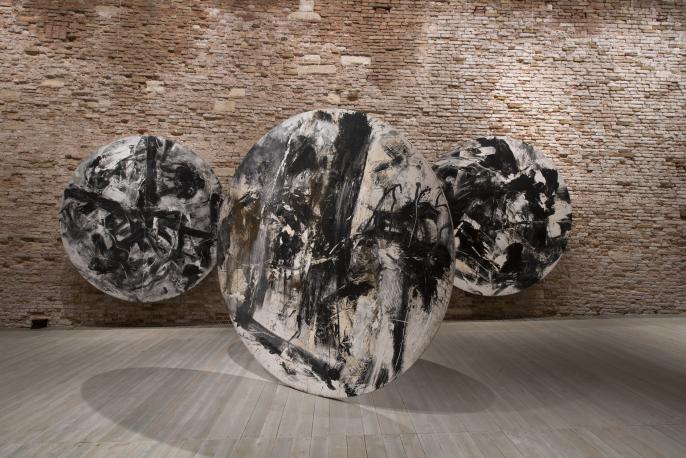 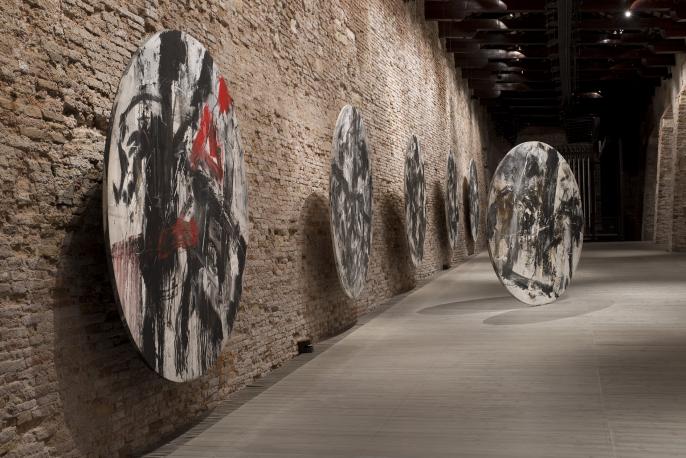 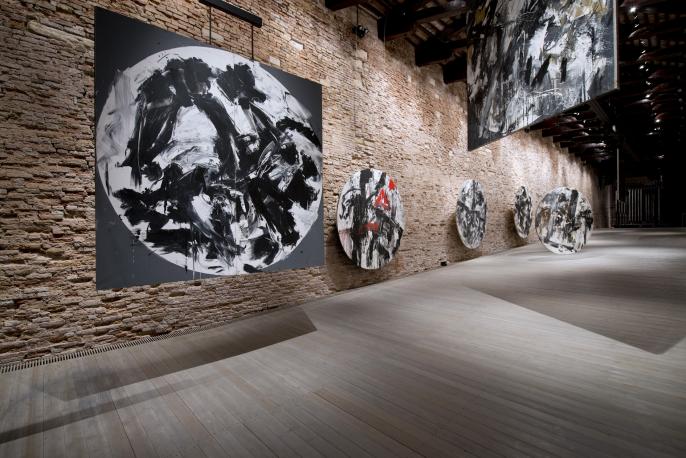 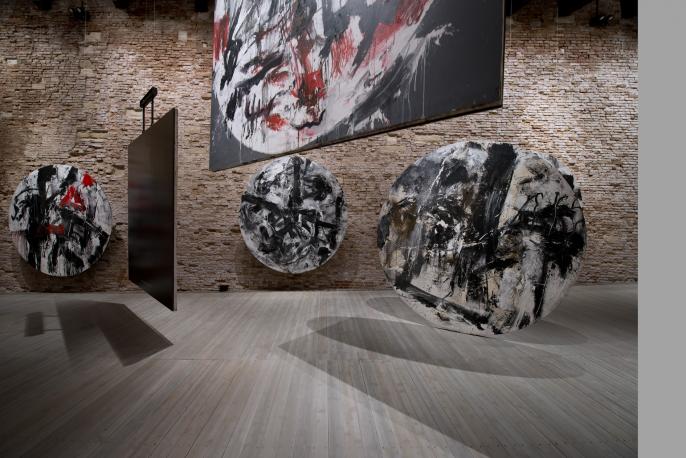 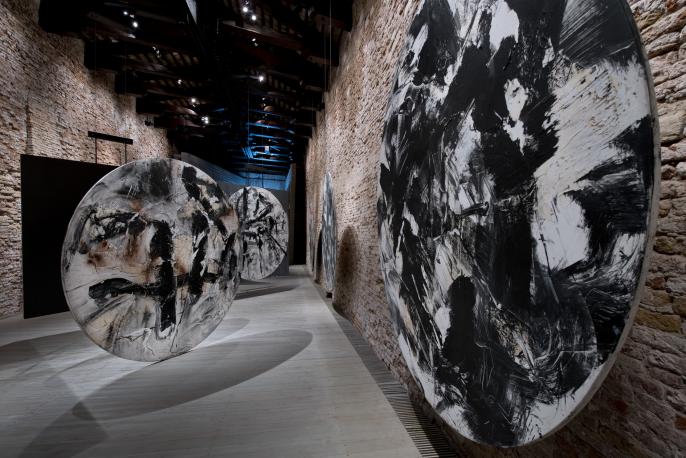 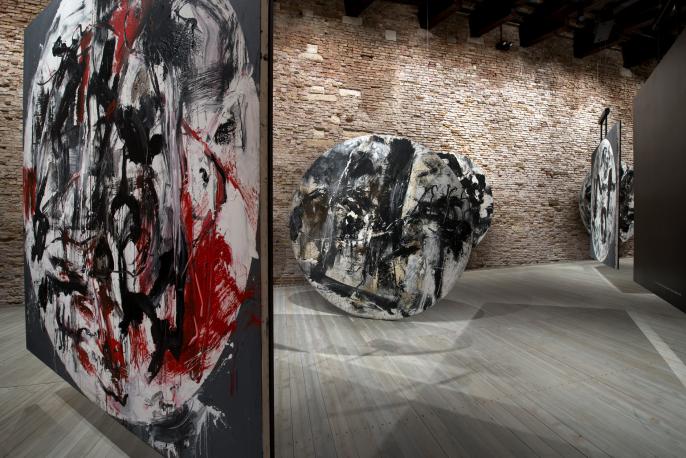 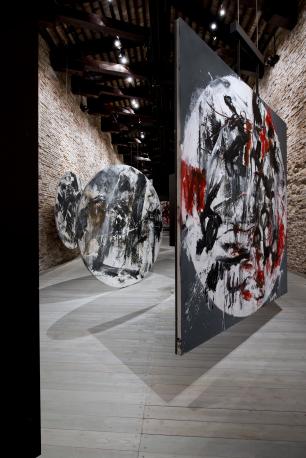