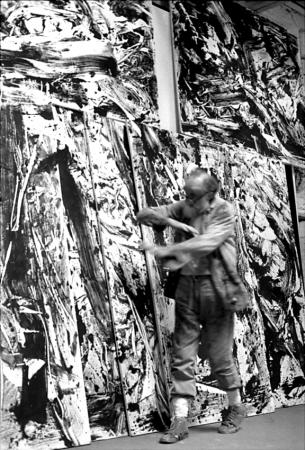 At the Padiglione d’Arte Contemporanea (PAC) in Milan inaugurates “Vedova …continuum…”, exhibiting for the first time canvases from the ...in continuum, compenetrazioni/traslati '87/'88 cycle (1987/1988), mounted by the artist on site.
In this period, creates a whole cycle of works on laminated metal, revisiting earlier explorations (from 1968).
Shows the Partiture '91 cycle and his triptych Oltre at the 1992 international exhibition "Due mondi a confronto – Columbus and the era of the Great Discoveries", in a personal room in the 13th-century wing of the Ducal Palace in Genoa.
Also contributes to "The Artist and the Book in Twentieth-Century Italy" exhibition at the Museum of Modern Art, New York, curated by Ralph Jentsch, with the multiple-lhitograph Dai 5 mondi (1969-1970), an exhibition that showcased one hundred and seventy-five books and magazines created by Italian artists.
At the XLVth Venice Biennale, installs in the special “Punti cardinali dell'arte” section his Partiture '91/'92, resulting from a work series on laminate and metal sheets, which resumes the experiments at the end of the 1960s.